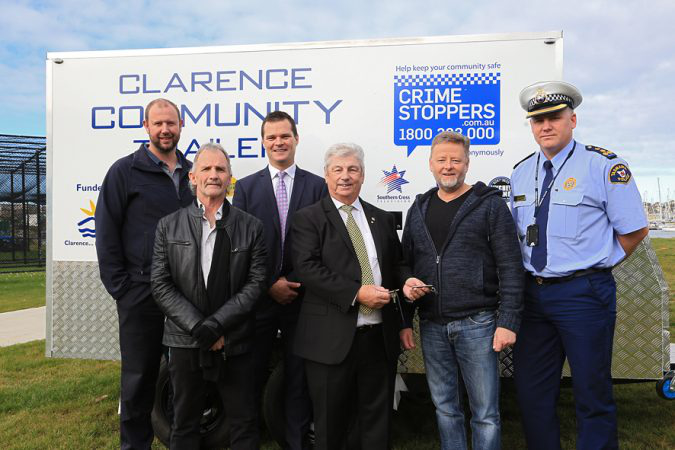 Crimestoppers, along with a number of community groups came up with the idea of a community trailer that could be used by the community to help trail bike riders access the Cambridge Motocross Track. On the 1st of June 2018 there was a handover of the trailer at the official Crimestoppers Week, function.

“Over the past three years, Crime Stoppers Tasmania has gone from strength-to-strength having rolled out numerous community-based projects. Today’s wrap up event included launching the new Clarence Community trailer, which has been built by Rosny College students and supported by many Tasmanian businesses and community groups.

Crime Stoppers Tasmania CEO, Ron Franks, said, “Once again, Tasmania has shown the world that we can mix it with the best when it comes to successful community engagement. The Clarence Community Trailer is a great example and all Tasmanian’s can be proud of the role they have played in ensuring our state remains one the safest places to live and raise a family.”
The trailer will be owned by the local community and used to support meaningful initiatives including reducing the impacts of motorbike hooning in the Clarence region and providing riders with greater access to the Cambridge Motocross track.”

Who can use it?

The trailer is available for use by community groups throughout Clarence and interested parties can contact Dermot on the form below to organise use of the trailer. There is an insurance form that needs to be completed before the trailer can be used so make sure you give yourself plenty of time to get the form in before you’re scheduled to pick the trailer up.

Download the Insurance PDF form, fill in your details and upload with your enquiry.